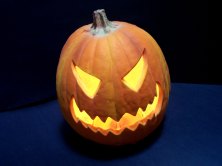 As Halloween approaches IPcopy brings you a skull tingling tale of bad faith…….

On 30 March 2009, Alison Hendrick applied to register the ‘Skull’ device shown below and word mark ‘Artjunkie’ in Classes 24 and 25.

On 11 June 2009, Tony Knight, trading as Too Fast To Live Too Young To Die Apparel, applied to register the ‘Shutter Glasses Skull’ device shown below in Class 25. This application registered on 16 October 2009 under No. 2518310.

The Statement of Grounds provided no supporting details in connection with Section 5(4)(b). Sections 3(6) and 5(4)(a) were supported by allegations in a witness statement that Ms Hendrick’s ‘Skull’ device was “virtually identical” to his ‘Skull’ device, which he claimed he had been using since 1994.

Ms Hendrick filed a Counterstatement which asserted that ‘the opponent has taken her intellectual property and is passing off his wares as those of the applicant’.

Mr Knight also objected to Ms Hendrick’s application for ‘Artjunkie’ in Class 25 under Section 5(4)(a) on the basis that ‘SAINT ART JUNKIE’  was a fashion label established in 1994 by Mr Knight, which established a reputation.

Mr Knight made allegations that Ms Hendrick had a reputation for stealing trade marks of other companies.

Ms Hendrick filed a Counterstatement identical to that filed in Opposition No. 99597.

Under Section 3(6), Ms Hendrick asserted that Mr Knight was aware of, and copied, her trade mark. Under Section 5(4)(a), Ms Hendrick submitted that goodwill and reputation had been established in her mark through use on the e-Bay auction site in the UK since 7 July 2008. Under Section 5(4)(b), as the registration was created by Ms Hendrick in June 2008, it was subject to copyright. Ms Hendrick provided evidence of earlier use, including PayPal payments, eBay purchase details and screenshots from Wayback Machine.

Mr Knight denied the allegations made, maintaining that he created the design in 2002. He did not submit evidence to support his claims.

The oppositions were dismissed and the invalidity action successful.

In terms of the oppositions, the Hearing Officer held Ms Hendrick created both Skull devices. Also, Ms Hendrick demonstrated that she had been using the mark ‘Artjunkie’ since November 2004.

With regard to the invalidity action, it was held that Mr Knight acted in bad faith and the registration was made contrary to Section 47(6) of the TMA. As Mr Knight submitted fraudulent, incomplete and unreliable evidence, this was taken into consideration in relation to the award of costs.

Mr Knight appealed to the Appointed Person under Section 76 of the TMA on the basis that the Hearing Officer ‘failed to carry out full and proper investigation into the evidence sent’, ‘made some slanderous comments’ and ‘had been influenced by statements made in judgments delivered by His Honour Judge Birss in proceedings which had been brought against him by Dame Vivienne Westwood OBE in the Patents County Court’.  The Appointed Person rejected Mr Knight’s assertions and upheld the Hearing Officer’s decision dismissing the Appeal.

This is a clear case of bad faith, which confirms established case law based on the rights of the senior user and reinforces the inextricable link between Section 3(6) and Sections 5(4)(a) and 5(4)(b).