We won’t cover the basics of the unitary patent system again here and readers wanting a quick recap of the system are invited to check out IPcopy’s report on the first CIPA seminar on this subject which can be found here.

The timeline for implementation of the unitary patent system was touched upon. On this point IPcopy notes that, although the system is due to go live within 4 months of ratification of the UPC Agreement by Germany, the UPC Committee has indicated that they require 6-9 months to put everything in place for the Court. It may therefore be expected that once Germany completes its ratification process it could hold off actually depositing its instrument of ratification while the Provisional Application Phase gets underway.

The entire UPC ratification process is, of course, currently in limbo due to the pending challenge in the German constitutional court. As of the date of posting there has been no further news on when(if) the German procedure will get underway again. Readers curious about the potential impacts of this challenge and Brexit are invited to check out our post here.

Once a patent grants there will be a non-extendable period of one month during which unitary effect may be requested at the EPO. Assuming that the requirements of the request are met then the patent will issue with unitary effect and this will be reflected on the EP Register (see below).

In the event that either the above correction is not filed or the deficiencies are not correctable (which may be because: the request was not made by the EP Patent proprietor; not all member states are designated; the patent issued with different claim sets in participating member states; or the one month deadline was missed) then the procedure may proceed to an appeal at the UPC.

It is noted that any such errors are likely to flag up within the standard 3 month validation period and so it would be possible to validate the EP patent in the normal manner as an alternative to pursuing a request for unitary effect. It is also worth noting that many countries that are part of the unitary patent system are considering a safety net in the event of a failed unitary effect request (see here for further details).

A request for unitary effect may be made online via the EPOline software (see screenshot below) and any EP representative under Article 134 EPC may make the request. 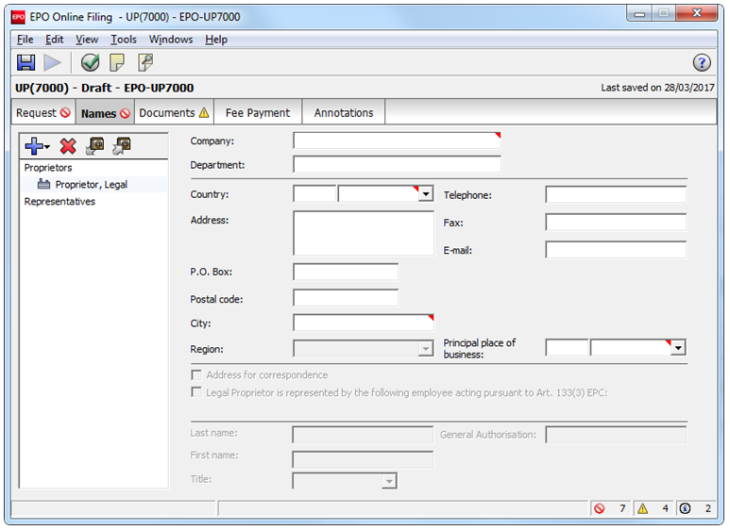 There is no official fee that is due when requesting unitary effect but, during a transitional period, a translation of the EP patent into English (if the patent is in French or German) or any EU language (if the patent is already in English) will be required.

Unitary Patent  – Renewals at the EPO

The single UP renewal fee for all states is payable to the EPO annually after grant. The usual time windows, grace periods and payment day calculations apply.

The proposed fee schedule for renewals is shown below.

As well as the changes to the validation procedure and the renewals process, the EPO will have some other duties with respect to the unitary patent namely the registering of transfers.

The EP patent register will include details of the participating member states for unitary effect (see the earlier EP Register screenshot) but it is noted that representatives will need to keep track of the current participating member states when requesting unitary effect as this is likely to change over time and until a member state has completed its UPC Agreement ratification procedures it won’t be included in the list (and will therefore require a normal validation to take place).

Requesting an opt-out from the UPC

The final part of the presentation was on the opt-out process. It is worth noting here that the rights of representation to file an opt-out request are different to those for requesting unitary effect of a granted EP patent.

For the UPC, representation is covered by Article 48 (either lawyers authorised to practice before a Contracting state court or an EP with a European patent litigation certificate or a suitable exemption).

The UPC will, during a transition period (of 7 years extendable by a further 7 years), have jurisdiction over both unitary patents and classical European patents.

Unitary patents will always be litigated in front of the UPC but, until the end of the transitional period, it will be possible to register an opt-out from the jurisdiction of the UPC in respect of classical European patents. Such an opt-out may also be withdrawn to bring a classical European patent back into UPC jurisdiction. An opt-out once filed will remain effective after the transitional period has expired. It is also noted that opt-outs (and withdrawals of opt-outs) will only be able to be filed if an action has not already begun in front of the relevant court (for more details on this see our earlier post here).

In the event that the true owner is not listed on the register then an additional declaration will be required.

In cases where there are multiple owners then all the proprietors will need to lodge the opt out. In cases relating to the opt-out of an SPC then the patentee and the SPC owner must lodge the request together.

The unitary patent system if and when it goes live will require a number of strategic decisions to be made: