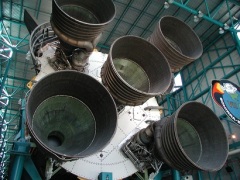 As highlighted in Adam Brocklehurst’s earlier post, Keltie hosted a webinar on “IP in the Space Sector” on 27 February. The speakers were Adam Brocklehurst and Richard Lawrence and the webinar covered IP fundamentals and myth-busting, issues in space sector IP and other relevant topics.

Since the webinar we’ve had a few requests for access to the slide show and this is embedded below. If you have any questions regarding the topics covered or have a spaced-based IP question then please sound off in the comments section. END_OF_DOCUMENT_TOKEN_TO_BE_REPLACED

IP in the Space Sector

Despite having had an interest in all things extra-terrestrial from an early age, I’ve been regularly dumb-struck by innovations in space-related technology both upstream (things in space or launching them there) and downstream (things down here using technology or data from space).  Planet Labs are deploying a constellation of 28 tiny imaging satellites, each costing a fraction of the price of typical commercial satellites, promising near-global, daily imaging.  Brokers like Spaceflight Services put these and other small satellites into orbit by squeezing them into the space inside launch vehicles around larger satellites.  Terra Recovery image landfill sites from space, to figure out what their robots could mine from them.  You can even buy your own satellite launched and ready to do your bidding, evil or otherwise (laser weapons not included).

Prompted by such giant leaps for space-faring mankind, and along with the likes of World IP Review and IPKat, we’ve been pondering some idiosyncrasies in IP in the space sector.