Home » General Interest » Disappearing Brands – but what becomes of the trade marks?

Disappearing Brands – but what becomes of the trade marks? 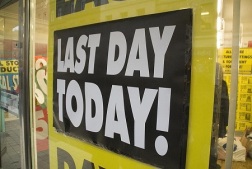 HMV has become the latest high street victim to collapse into administration after 92 years on UK high streets. More than 4000 jobs and 236 stores are at risk unless a suitable buyer can be found by administrators. This news comes just days after camera retailer Jessops announced that it was unable to continue trading. As a result, all of its 187 stores were closed down. The company stated in 1937 when Frank Jessop opened his first shop in Leicester. Both HMV and the Jessops trade marks have been well known to the public following many years of use …. but what will become of the names now and can the trade marks be saved by anyone?

Under UK Trade Mark Law, both a registered trade mark and a pending application are property of the owner. As such, it can form a very valuable asset of a company. It can also form part of the company assets if a company ever falls into liquidation.

Where a trade mark forms part of a liquidated company, the right to that trade mark sits with the administrator or liquidator until it is sold to raise funds to pay off creditors. Any assets which are not divested following liquidation will become the property of the Crown who will then become the point of contact for parties with an interest in obtaining the mark.

Any goodwill associated with a trade mark can also be sold, with the assignment being signed by the liquidator as the Assignor. It is good practice to inform the UKIPO of the assignment for it to be valid and for the change in ownership to be recorded.

Sold! ….but without the goodwill?

A trade mark that has been associated with a business for many years can acquire a substantial goodwill and reputation for the goods or services upon which it is used. It is often a shame to lose such a valuable trait in a trade mark, particularly if it is well known to consumers. If a mark is divided from its goodwill for the purpose of a sale by the liquidators, the mark can become worthless and lead to difficulties with the exploitation of a mark. A mark used without the associated goodwill can also cause confusion amongst consumers as a result of an inability to identify the origin of products associated with that trade mark.

If a trade mark has been used under licence, the insolvency will not immediately affect the licence agreement unless a contract terminates automatically upon one of the parties becoming insolvent. If a licence benefits an insolvent licensor (eg through royalties), administrators / liquidators may want to keep an agreement in place to generate funds. On the other hand, a licensee can also take over the maintenance of a trade mark or may negotiate with administrators / liquidators to assign the marks and any associated goodwill if the rights are still of value. Licensees often face the greatest loss with insolvent companies as they may lose the trade mark that is essential to its business.

For buyers of an insolvent business it is important to ensure that full due diligence is conducted prior to entering into any contracts. These investigations will reveal whether a business has taken the steps necessary to maintain its trade marks and will identify if the marks are used by any other third parties or whether any rights have been infringed.

Whilst the effects of insolvency can lead to a devaluation of a brand that once evoked loyalty or quality, many trade marks have survived the difficult circumstances associated with liquidation and can retain their value.

ODDBINS – Bought by European Food Brokers and appointed Oddbins former director to re-launch the stores with a new range of wines.  However, the trade mark rights and the domain name oddbins.com were bought by another entity, Layburn Enterprises who allowed European Food Brokers to use the trade marks and the domain name under a license agreement.

PAST TIMES – Past Times Trading Ltd closed all of its stores in February 2012. It had previously gone into administration in 2005, but was bought out by Epic Private Equity, a firm specialising in distressed companies.  The trade marks and domain name were bought by PT Bidco Ltd, which is also owned by Epic Private Equity. The sale was settled by a distribution to Epic Private Equity under its debenture security so no cash was paid saving a number of jobs within the company. PAST TIMES now continues to trade through its website.

CLINTONS / BIRTHDAYS – Clinton Cards was rescued out of administration by Lakeshore Lending, a subsidiary of Clinton Card’s largest creditor American Greetings . Both the CLINTON and BIRTHDAYS trade marks are now in the name of Lakeshore Lending. It is estimated that the administration buy out saved 4500 jobs and meant that only 350 of the 750 stores across both the Clintons and Birthdays fascias were closed.

COMET – Comet collapsed into administration in November 2012 after 80 years of trading with all of its 245 stores being closed and 6,900 jobs lost. Comet’s administrators do not expect to find a buyer for the company and so the trade marks will sit with the administrators. If the IP assets are not divested in the administration process they will then become property of the crown.

JJB SPORTS – JJB Sports went into administration in October 2012 after failing to secure the future of 133 shops and 2,200 staff. Administrators only managed to sell 20 stores to Sports Direct, which saved 500 jobs. Sports Direct also acquired the rights to the domain name jjbsports.com which now re-directs to Sports Direct’s webpage but did not buy the rights to JJB’s trade marks. The remaining stores have now closed. The trade mark rights will now sit with the administrators. As with the COMET trade marks, if a buyer is not found the trade marks will become property of the crown.

It is important that trade mark portfolios are maintained, with any changes in address or name being recorded at the relevant trade mark offices as soon as possible. An organised, up to date trade mark portfolio with records of evidence highlighting where a trade mark owner has enforced its rights to prevent a dilution of its trade marks will be more appealing to those who may eventually save a brand from failing completely.