Home » General Interest » Are these patents the key to the next revolution in 3D printing?

Are these patents the key to the next revolution in 3D printing? 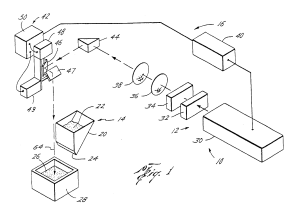 In recent years, 3D printing has entered the mainstream lexicon, partly due to increased media coverage and partly because 3D printers are becoming more affordable and accessible. In particular, the rise of desktop 3D printers aimed at the domestic market such as the MakerBot Replicator and 3D Systems Cube have been a boon for hobbyists and early adopters. These printers are sold ready to use out of the box for simplicity compared to early affordable solutions which were self-assemble kits like the MakerGear Mosaic or the open source RepRap Mendel.

The McKinsey Global Institute, The Economist and Quartz, along with many others, cite the expiration of certain patents related to FDM in 2009 as enabling the recent proliferation of cheaper FDM 3D printers. They go on to anticipate that the expiration of key patents related to another additive manufacturing technique, selective laser sintering, in 2014 may lead to another step change in the field of 3D printing.

But what are these key patents that everyone’s talking about, and will they really make such a big impact?

On 17 October 1986, Carl Deckard, then a PhD student at the University of Texas at Austin, filed the first patent related to selective laser sintering which later granted as US 4,863,538. In laser sintering, a layer of powder is deposited to cover a build platform, a laser is then used to fuse areas of the powder into a layer of a desired object, once a layer is completed, more powder is deposited for the next layer to build up the object.

The original laser sintering patent specification was used as the basis for around twenty further divisional, continuation and/or continuation-in-part applications in the US, as well as over a hundred applications in other parts of the world. The last two US patents that are still in force in this extended family are US 5,597,589 and US 5,639,070 with issue dates of 28 January 1997 and 17 June 1997 respectively.

Where are they now?

These two US patents have a term of 17 years from their issue dates, equating to expiration dates of 28 January 2014 and 17 June 2014. Quartz states that the key laser sintering patents will expire in “February 2014” and the McKinsey Global Institute cites the later date of “June 2014” making these the patents whose expiration will allegedly enable the next revolution in 3D printing.

Most of the applications outside the US were filed in Europe with direct applications in Germany. However, all of the German and European patents in the original laser sintering family have now expired or been abandoned. There are signs that laser sintering and the similar process, selective laser melting, are already picking up in Europe, and in particular, Germany. One of the leaders in laser sintering, EOS GmbH, is based in Germany, as are other providers of selective laser melting such as SLM Solutions GmbH, Realizer GmbH and Concept Laser GmbH, and others based elsewhere in Europe include Arcam AB (Sweden) and Phenix Systems (France). It may be possible that Europe’s dominance in laser sintering is due to the absence of patent protection by the original laser sintering patent family.

The original laser sintering patent family represent just a handful of the many patents that exist related to laser sintering. The patents filed by Carl Deckard were later licensed to DTM Corporation and then 3D Systems.

Developments and improvements to the technology made by these companies have also been patented and it may turn out that these later developments will have a greater effect on the affordability of laser sintering.

Whilst patents may or may not have helped the 3D printing industry, given that companies in Europe are already establishing themselves as leaders in laser sintering, it feels unlikely that the expiration of the two remaining US original laser sintering patents will really lead to 3D printing ‘exploding’ in 2014.