Home » Designs » From Star Wars to New Order: the House of Commons discuss the IP Bill

From Star Wars to New Order: the House of Commons discuss the IP Bill 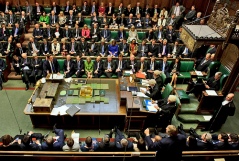 The second reading of the Intellectual Property Bill in the Commons happened last Monday (20/1). It was disappointing that only around 25 people appeared to be present for the reading which took in the television and film watching habits of some members of the House, whether the Prime Minister can identify his Minister for Intellectual Property and plenty of discussion about the inclusion of criminal sanctions for copying of registered designs (Clause 13).

The transcript of the session can be found at the following links – (Part I [see column 38] and Part II) – and we’ve highlighted some of the more interesting parts below.

The Bill was introduced by the Minister for Universities and Science, Mr David Willetts, who highlighted that the Bill addresses issues raised in the Hargreaves Report. The design sector was mentioned and the first, of many, name checks for ACID (Anti-copying in Design) was made. Gratifyingly, the reference to ACID drew an immediate response from Mr James Gray who mentioned that Dyson is based in his constituency and queried whether the word “intentionally” could be inserted into Clause 13. This in turn sparked the first contribution from Pete Wishart (Perth and North Perthshire) (SNP) who had apparently digested the entire output of ACID on the subject of Clause 13 and its possible extension to unregistered design right (UDR).

Mr Willetts suggested that the balance of the Bill was broadly correct but indicated that it could be considered further in Committee (which is due to start on 28th January). Hopefully, this means that some of the shortcomings of Clause 13 that have been reported on this blog and in other locations can be addressed. Unfortunately, it would also seem that the issue of UDR will also be raised in Committee. For details on the various amendments that have been proposed for Clause 13 (and other parts of the Intellectual Property Bill see our posts here and here).

Following some further discussion of the Bill and its intended purpose the floor was handed over to Mr Iain Wright (Hartlepool) (Lab) who proceeded to mention Downton Abbey, Blue Monday by New Order and the fact that he was happy about the new Star Wars movie being produced in the UK (though he hoped it would be more Empire Strikes Back than Phantom Menace). He even allowed a plug for Game of Thrones which is partly filmed in Northern Ireland!

Discussion relating to the creative industries continued for a little longer and just as we were beginning to think that Mr Wright had wandered into the chamber under the mistaken impression that this was actually the Parliamentary Film Appreciation Society he managed to bring the discussion back to the IP Bill. So he did have a point in mind, he was just making it by going the long way round.

The unified patent court was raised at this point and Mr Wishart interjected to query whether Scotland would be in line for a local division of the UPC.

Matters then returned to Clause 13 and Mr Willetts put forward an alternative take on the wording of this provision. The fact that the clause has been opposed by the IP Federation, the Intellectual Property Bar Association, the City of London Law Society, the Chartered Institute of Patent Attorneys, and a number of experts and specialists, including Sir James Dyson was highlighted and the potential “chilling effect” of the clause on UK industry was raised.

For those of us that oppose Clause 13 and who contend that, at the very least, it requires further amendment the comments from Mr Willetts were welcome and suggested that this issue is going to get plenty of airtime in the Committee stage.

Unfortunately, the possibility of including unregistered design right reared into view again. Mr Willetts appeared to be using the reasons given for the lack of UDR in Clause 13 as a reason for attacking Clause 13 generally. However, the counter view that the provision should be expanded to include both registered and unregistered rights was discussed at some length.

The discussion on the issue of Clause 13, and the inclusion of unregistered rights, provided further opportunities for members of the house to namecheck the IP Federation, ACID, the Alliance for Intellectual Property and the Law Society. Pete Wishart suggested that:

No evidence was given for this statement but it compelled Bob Stewart (Beckenham) (Con) to ask how unregistered designs could be policed in the context of Clause 13 issues. Mr Wishart noted at this juncture the database that ACID has developed and suggested that a government version of such a database could be launched. This led me to wonder whether designers will now have to register their unregistered designs!

The unified patents court then got another mention from Pete Wishart. Unfortunately, whereas he’d effectively summarised ACID’s position earlier in the session he rather dropped the ball when discussing the UPC by suggesting that:

As the Minister knows, under the new European regime every member state is allowed four divisional courts.

The remainder of the session tended to repeat many of the arguments that had already been made. However, there were run outs for a discussion of Lea & Perrins Worcestershire sauce in the Hare & Billet pub in Blackheath and the following suggestion from Jim Dowd (Lewisham West and Penge) (Lab) that the Prime Minister might not know who all his Ministers are(!):

I think everybody welcomes the Bill as far as it goes. The Minister said in introducing it that it was a small but perfectly formed extract from Hargreaves. I agree to some extent with part of the latter, but I certainly agree with the former.

The transcript from the Commons like the earlier ones from the Lords is quite an entertaining read and seems to suggest that the Bill will get a critical review during the Committee stage. Although there was no consensus on the issues of criminal sanctions for the copying of registered designs all parties could at least agree that this was the most contentious area of the Bill. Clause 13  and Clause 21 (Reporting duty of Secretary of State to report on how IPO has supported innovation and growth) were regarded as the parts of the Bill most likely to take up time during the Committee phase.

So, what happens next?

Well, as noted above the Committee stage is due to begin tomorrow and will continue until 30th January after which point the Bill will be read for a third time in the Commons. In the meantime, if you have strong feelings about the Intellectual Property Bill then now is the time to air them. Hopefully, we will hear more opponents of Clause 13 making their voices heard over the next few days and weeks.

On the issue of Clause 13, as far as I’m concerned, and taking the film, TV and music discussion above as my cue, I would humbly suggest that the House sits down to listen to the lyrics of the song “Rip It Up” from the Scottish post-punk band Orange Juice:

By ipcopymark in Designs, General Interest, Law, Patents on January 27, 2014.
← Can I patent it?: A quick-guide flow chart for inventors CIPA/IPO Meeting to discuss representation in front of the Unified Patent Court – Part I →