Professional ethics – a bit like Isaac Asimov’s Laws of Robotics 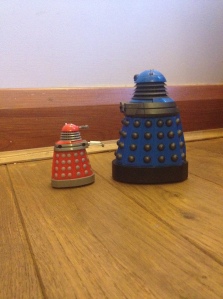 “A Dalek may not injure a Timelord or, through inaction, cause a Timelord to come to harm! …. Son, we need to have a serious chat”

Isaac Asimov (1920-1992) is one of the Greats of science fiction.  While practising as a chemist in the 1940s, he depicted in his stories a world in which, from the late twentieth century, humanity was increasingly served by robots of high intelligence.  To prevent these robots from taking over from, or destroying, humanity – or being abused by one human against others – they were programmed with the three “Laws of Robotics”:

“2 – A robot must obey the orders given to it by human beings except where such orders would conflict with the First Law.

“3 – A robot must protect its own existence as long as such protection does not conflict with the First or Second Law.”

These laws were admirably crafted, but had enough ambiguity to support ingenious stories.  The stories are still readily available (the above laws are as set out in a recently purchased copy of I, Robot.)

A legal practitioner such as an English solicitor or a UK and European patent attorney is likewise subject to hierarchical rules embodied in codes of conduct of various types.  In the public interest, their behaviour is constrained, including their response to client instructions.  Indeed, with a little licence, one may reformulate these ethical codes into three-part form corresponding quite well to the three Laws of Robotics:

“Rule 1 – The practitioner must uphold the rule of law, act with integrity towards all, and preserve his or her independence.

“Rule 2 – The practitioner must act in the best interests of the client, offering a good standard of service, within the constraints of Rule 1.”

“Rule 3 – The practitioner is entitled to be paid for his services, within the constraints of Rules 1 and 2.”

The client cannot expect the practitioner to lie, or mislead, for him, eg by instructing a US patent attorney to file an incomplete Information Disclosure Statement.  A private practice must refuse instructions so to lie or mislead, even if the client is a big one that threatens to take away all its work from the practice, which then would have to lay people off.  If a practitioner works in-house – ie is an employee of the client – he or she must refuse an instruction to lie or mislead even if the employer threatens dismissal (albeit unwisely as a matter of employment law).

An interesting case arises where the client expects the practitioner to file a patent application despite the fact that he admits that the invention has been published such that the application could not result in the grant of any valid claim in any territory.  The actual filing would not involve a direct lie in many territories, but the only value of the filing would be abusive (eg to create a temporary “legal fog” to confuse competitors).  The author’s view is that the practitioner should refuse instructions to make such a filing.

The practitioner must face up to conflicts of interest between clients.  A prospective new client who wishes a private practice to patent in the same technical area as an existing client of the practice may have to be turned away.  An individual who moves between practices may have to avoid acting against a former client in his or her new job.

Not all payment régimes are allowable.  Thus, in the author’s view, a private practice should refuse an offer from a start-up client of an equity interest in lieu of cash payment for the patenting work that the practice does.

Finally, the IP practitioner, especially the in-house one, needs to take a broad view.  If he or she suspects that the IP work he is being asked to do is in support of a deal that is in breach of law on competition, bribery and corruption, or health and safety, then the practitioner may have to insist on evidence of compliance (large companies usually have internal compliance procedures that can be invoked).

Dr Michael Jewess was formerly Head of IP at BAE Systems and is now an attorney at K2, the network of patent and trade mark attorneys developed by Keltie LLP.