Home » General Interest » Have A Break, Have A KitKat waiting for clarification from CJEU on three-dimensional mark

Have A Break, Have A KitKat waiting for clarification from CJEU on three-dimensional mark

Nestlé applied to register its famous four-fingered Kit Kat bar as a three-dimensional registered trade mark. Cadbury opposed the application. On 20 June 2013, a decision by the UKIPO refused Nestlé’s trade mark application in class 30 for chocolate and various chocolate confectionery products but allowed the application in relation to cakes and pastries. Justice Arnold largely agreed with the hearing officer’s reasoning that the three-dimensional shape should not be registered because it lacked distinctiveness and had not acquired distinctiveness, and that the shape was necessary to achieve a technical result. However, he referred some interesting questions to the CJEU that could result in a significant change in the way in which we approach shape marks.

1. Shape resulting from the nature of the goods / shapes necessary to achieve a technical result

The UKIPO considered that the mark consisted exclusively of the shape of the goods which was necessary to obtain a technical result and therefore not allowable under trade mark law.

In particular, the UKIPO stated that the basic rectangular ‘slab’ shape results from the desire to conveniently and cheaply mould, wrap and stock chocolate bars or biscuit bars as compared with ‘fancier’ shapes. As such, the shape was contrary to Article 3(1)(e)(i) of the Directive and TMA 1994, s 3(2)(a).

The hearing officer also held that the need for a particular technical result necessitates the breaking grooves are i.e. the need to allow one to break up the bar for easy consumption. Also, it was held that ‘the existence, number, position and dimensions of the grooves which divide the product into ‘fingers’ were features necessary to obtain the technical result of breaking the chocolate into pieces, including the need to consider the portion size and constraints of manufacturing such as the depth and angle of the grooves. As such, the feature of the chocolates bar were contrary to Article 3(1)(e)(ii) of the Directive and TMA 1994, s 3(2)(b).

In the hearing the appeal against the UKIPO’s decision, Justice Arnold considered it necessary to request clarification on the interpretation of Articles 3(1)(e)(i) and (ii) as we will see below.

The hearing officer held that although the shape could be distinctive in respect of cakes and pastries, in the field of chocolate bars and biscuits the basic grooved rectangle shape of the mark lacked inherent distinctiveness because it is common place.

The hearing officer found that the mark had not acquired distinctiveness as claimed by Nestlé. It was not sufficient that consumers associate the shape mark with Kit Kat as established by survey evidence in the IPO hearing. Instead, Nestlé would need to prove that consumers perceived the shape as a badge of origin. In this case, the UKIPO concluded that consumers relied upon the word mark Kit Kat as a means of identifying the product’s origin (both on the packaging and embossed on the chocolate itself). Nestlé appealed the IPO’s decision and these are the questions referred by Justice Arnold to the CJEU:

“In order to establish that a trade mark has acquired distinctive character following the use that had been made of it within the meaning of Article 3(3) of the Directive, is it sufficient for the applicant for registration to prove that at the relevant date a significant proportion of the relevant class of persons recognise the mark and associate it with the applicant’s goods in the sense that, if they were to consider who marketed goods bearing that mark, they would identify the applicant; or must the applicant prove that a significant proportion of the relevant class of persons rely upon the mark (as opposed to any other trade marks which may also be present) as indicating the origin of the goods?”

“Where a shape consists of three essential features, one of which results from the nature of the goods themselves and two of which are necessary to obtain a technical result, is registration of that shape as a trade mark precluded by Article 3(1)(e)(i) and/or (ii) of the Directive?” 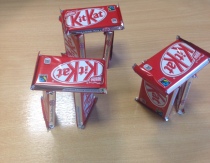 The case is not lost for Nestlé. Whilst the UKIPO refused Nestle’s UK application in its  decision in June 2013, OHIM’s Board of Appeal accepted its CTM Application in a decision in December 2012, finding that the mark had acquired a distinctive character through its use on the EU market. It also rejected Cadbury’s contention that the mark consisted exclusively of a shape dictated by a technical result to be achieved. However, we now await a final word from the highest Court of the EU in relation to the CTM application.