Cast your mind back to December 2012 when the Unitary Patent Regulation and Unified Patent Agreement were approved by the European Parliament, and you may recall a lot of press releases explaining what great value for money the unitary patent would be. In particular, we were told that the unitary patent would bring patent protection in Europe financially in line with patent protection in other countries, such as the US and China.

Back then, the fees relating to the unitary patent were completely unknown. Fifteen months later, we know little more than we did then: it seems likely that there will be no fee for validating a unitary patent, and rumours are that the opt-out fee will be in the region of €50 – €100, but we are still in the dark when it comes to the most important fees of all: the renewal fees of the unitary patent. The only titbit that has recently escaped the lips of anyone in the know came from the EPO president, who said cryptically in December 2013 that the renewal fees would be “higher than many would hope, but lower than some might fear”.

So, in this post, which will feature a lot of graphs, we will be taking a look at how value-for-money (in terms of renewal fees) differs among countries within the EPC and how the EPC and Unitary Patent countries currently compare to the US and China, and we will consider what level the Unitary Patent fees might need to be if they are to match the value-for-money offered by Chinese and US patents. We’re even going to go so far as to put out a prediction. We fully expect to be proved completely wrong, but hope that throwing out some actual numbers might generate some interesting discussion from commentators…

1) A comparison of renewal fees within the EPC states

Within the 38 EPC states, renewal fees vary from a twenty-year total of around €1,590 for Macedonia, to around €13,200 for Germany. The UK comes in at €5,460, very close to the average of €5,700 for all EPC states. Interestingly, the average in unitary patent states is a little higher than the average for EPC states, coming in at €6,500 in total.

To keep a patent alive for all twenty years in all EPC states will cost you almost €220,000, and in all twenty-four of the current Unitary Patent states it will set you back €156,000.

But a straight-forward look at renewal fee amounts can be misleading. It would be helpful to assess the value for money that a patent in each country offers. Of course, the true value for money will depend on the geographical nature of the activities of the patent proprietor (an Icelandic patent may be useless to some but essential to others), but we can make a rough one-size-fits all assessment based on the GDP of a country1.

So, the following graph shows the same data normalised to GDP. A few outliers (in particular those with small GDPs such as San Marino, Monaco and Malta) are way-off the scale, so we have zoomed in on the lower end.

2) A comparison between EPC states, the US and China: the current situation

So, how does the cost of patent protection in Europe currently compare to the US and China? The graph below shows cumulative renewal fees normalised to GDP2:

Renewal fees for a European application, which of course covers all EPC states, are well-aligned with those for a US and Chinese patent. By contrast, a granted patent validated and renewed in all EPC countries, or in all proposed unitary patent countries, represents far less value for money than a US or Chinese patent.

However, we are all aware that these numbers without context are highly misleading. Most European patents are validated only in a handful of countries, and the most popular countries for validation tend to be those that represent good value-for money. Considering only the top three validation countries (UK, FR, DE) or the top five validation countries of the unitary patent countries3 (UK, FR, DE, NL, BE), the value-for-money is markedly improved, and for the first eleven-or-so years is roughly in line with the US. From year twelve, onwards, however the gap between the top validation countries and the US and China opens up

So what level would the unitary patent fees need to be to offer competitive value for money? 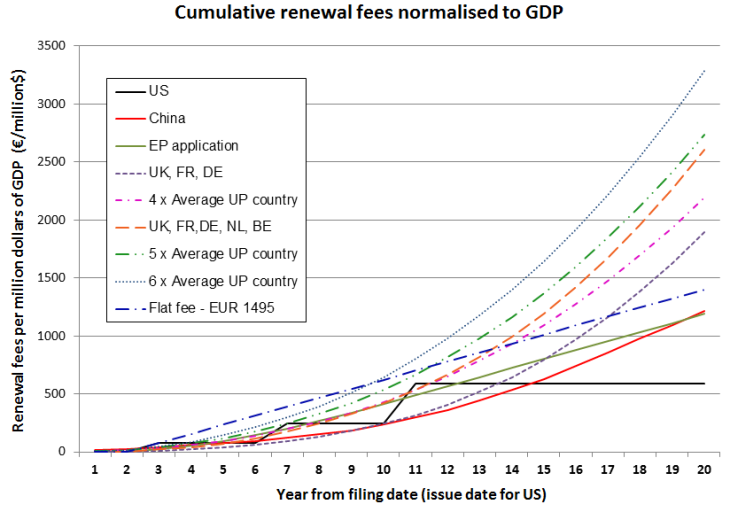 Something that is instantly obvious from these graphs is that for any level of renewal fees that is based on the current average of unitary patent countries, or on the sums of national renewal fees in the most popular validation states, the value for money breaks away dramatically from the US and China from about year twelve onwards. This is because in almost all EPC states renewal fees increase year-on-year fort the life of the patent. By contrast, in the US, no renewal fees are paid after 11.5 years from the issue date, and in China the renewal fee stays at fixed levels for years 10-12, 13-15 and 16-20.

With a traditional ‘bundle’ European patent steps can be taken to mitigate these late-life costs: it is very common practice for patentees to trim portfolios late in the life of a patent by dropping less important states to save costs as the fees increase. However, this will not be possible with a unitary patent. The unitary stands and falls in all unitary patent states, and the unitary patent cannot be ‘partially renewed’ to reduce costs.

Looking at a few specific examples of possible fee levels, we can see that to get anywhere near the value for money that China offers, the renewal fee would need to be low. Something roughly in line with the sum of the current renewal fee for the UK, France and Germany would keep in line with China until year eleven, but even that low level of fees would break away for the last nine years for the reasons discussed above. A renewal fee this low seems highly unlikely.

Setting the renewal fee at roughly four times the unitary patent country average, or at a level that corresponds to the sum of the current renewal fees for the UK, France, Germany, the Netherlands and Belgium, would give value-for-money roughly in-line with the US until year twelve.

The average number of countries in which European patents are currently validated is generally agreed to be five countries. A level at five times that of the unitary patent country average would be therefore be a reasonable level to expect for the renewal fees. This would be roughly in line with the US until year seven, and would stay reasonably close to the US until year eleven.

Six times the average moves away from the US quite quickly: the paths cross at year four and stay in the same ball park until about year seven. A fee at this level would look less attractive to industry, but could be necessary to keep the unitary patent self-financing.

Beyond six times the average seems to us to be a highly unattractive prospect compared to the US and China. But who knows – as we have said, we cannot guess at what is on the other side of this equation.

Out of interest, we have included one last possibility: a flat fee of €1495 (which is the flat-rate renewal fee for a European patent application for years ten to twenty) for the entire term. A fixed fee for the entire term is unlikely (see also footnote four) but a very gently ramped fee is not out of the question. Longer-term this is a more attractive prospect, but at the start of the patents life the relatively high flat-rate fee leads to less value for money. It seems to IPcopy that to achieve the objective of attracting industry towards the unitary patent, it would be particularly important to provide excellent value for money at the start of a patent’s life.

Looking purely at the value-for-money side of the renewal fee equation, we’re going to predict a level of fees set at five times the average fees for all unitary patent country for the first ten years, and then at a flat rate for the last ten years4. We’re going to go all out and give you some numbers, and wait to be proved completely and utterly wrong:

So how does that look in comparison to other countries?

Even with the flat rate fee from ten years onwards there will be a gap between the unitary patent and the US and China towards the end of a patent’s life, but it seems that closing this gap will be unfeasible.

If the ratification process is still on-going when the unitary patent gets up and running this will affect the value-for-money offered by a unitary patent. If a large number of states still need to ratify, the effect could be significant and unitary patent could be a far less attractive prospect, whatever the level of renewal fees.

As IPcopy has previously suggested, having as may countries as possible ratifying the Agreement before the ‘go live’ date will be crucially important in determining the success of the unitary patent.

2 For US patents, renewal fees are calculated from the issue date, rather than the filing date. This makes it tricky to do a direct comparison: I have elected to bump the US fees up to the same zero-point as Europe/China. This puts a slightly smaller disparity between the US and other countries in the early years and a slightly larger disparity in the later years. Of course, the picture is not 100% accurate for a real-life European patent either – in practice the renewal fee would follow the curve for a European application initially, and after grant the post-grant renewals would kick in on a country-by-country basis, so in all cases these graphs are a little bit academic!

3 The validation ranking is taken from this article and was accurate in 2003. The ranking is quite possibly out of date: if anyone has access to more up-to-date statistics on patent validations in EPC countries we would very much like to see it!

4 Article 12 1 (a) of the Unitary patent Regulation specifies that the renewal fee should be ‘progressive throughout the term of the unitary patent protection’. I think I could argue either way as to whether or not an increasing fee for years one to ten and a flat fee for years eleven to 20 is in keeping with this. At a push, a token increase of 5 Euros per year would be within the strict terms of this clause. Any comments from the floor?