Top 10 Technology Trends (as predicted by a patent database)

With the news that now even drones are going ‘mini’ we have been considering some of our other favourite top trending technologies of the past few years, and briefly looking at how their patent application numbers have progressed.

We should point out that no in-depth analysis has been done here, and we’ve simply performed some quick patent database searching with the phrases used in our titles for our favourite top trending technologies…

No one can deny the importance of studying genetic codes. Genomics not only provides a wealth of information about organisms, but has created vast possibilities for the future of modern medicine.

Considering that the first full genome sequencing was only completed in 2003, it is no surprise  that the number of patent applications soared from 71 in 2010 to 3602 in 2013 – an increase of almost 5000%. Now the human genome, with its approximate 20,500 genes, can be sequenced in a few days for only about a thousand pounds, illustrating the impressive speed at which this technology has been developed.

Of course, the ethics of biological patents is a difficult topic – strong arguments for patenting genomes or genomic techniques are present on both sides of the fence. In fact, it’s such a hotly debated and discussed topic that even the World Health Organisation (WHO) has a webpage devoted to ‘Intellectual property and human genomics’. We would certainly recommend visiting if you are interested, which maybe you should be, as we expect our number 1 top trending technology to be hitting the headlines more and more in the coming years.

Yes, unsurprisingly this has come out as our No.2 top trending technology. 3D printing has been everywhere the past few years – sometimes it feels a little inescapable. Even as this is being written there is news of a group at MIT called ‘Mediated Matter’ having produced an optically transparent glass printing process.

3D printing also has a number of interesting implications for intellectual property, as currently there has not been much jurisprudence discussing how intellectual property laws will be enforced if 3D printing makes it possible to produce items at home for personal use. However, there have been a few studies (and lots of discussion pieces) on IP in 3D-printing, including  a UK IPO – commissioned report entitled ‘Legal and Empirical Study into the Intellectual Property Implications of 3D Printing’ (which you can read about here).

So it seems like 3D printing won’t be going away any time soon!

The first thing we should point out here is we haven’t checked out whether every single patent refers to cloud computing in the IT network sense, rather than computing things related to real, actual clouds. But, we do think the rise of the ‘cloud computing’ patent is indicative of how ubiquitous this technology is becoming, enabling people to store and process data remotely and share resources with others.

There must be so many people out there with cracked phone screens, eagerly awaiting this technology to come to fruition. Although it isn’t here yet, there were 2969 patent applications filed in 2013 with the phrase ‘flexible display’ in them – so we can only hope that soon we no longer need to panic when our devices slip out of our hands.

Wireless (or inductive charging) involves two coils, a transmitter in the charger and a receiver in the device. An alternating current is passed through the transmitter to generate an electromagnetic field, in turn generating a voltage in the receiver, which charges the device.

Despite the concept of an electrical transformer being old, this new application of the technology spawned 4592 patent applications from 2010 to 2013. We hope that some of the patents deal with the poor efficiency and slow charging rate – otherwise we might just stick to plugging things in.

Self drive vehicles may use the road more efficiently

Normally the stuff of science fiction films and television, the autonomous vehicle really is happening now. With automatic parking, adaptive cruise control and lane departure warnings we can all get a taste of autonomous driving, before Google brings out its own version of the knight rider car, KITT.

The phrase ‘augmented reality’ in patent applications increased by 441% between 2010 and 2013, demonstrating how varied the use of this type of technology is likely to be – we’ll all soon be seeing things that aren’t actually there. (Or are they?!)

Graphene is a perfectly hexagonal, one-atom, 2D form of carbon; 200 times stronger than steel by weight, efficient electrical conductivity, a bipolar transistor effect and the hero of the advanced materials world –  with uses ranging from electronics, biological engineering and energy storage.

The Internet of Things, where physical objects have electronics, sensors and software to communicate and share data across different networks. With 2130 patents applications being filed in 2013, this may become more and more common, until we’re all texting our toasters and emailing our irons.

We’ve decided to keep renewable energy in the top trending technology list, even though there are plenty of other technologies that probably deserve this spot. Nonetheless, we’re hoping that the renewable energy sector will continue to produce interesting innovations as we make the eventual move away from fossil fuels.

Honorary mentions (things we thought should be on the list but didn’t make the cut).

Do you have any top trending technologies you think should be on the list? Or any you think are going to be the next big thing? Let us know below! 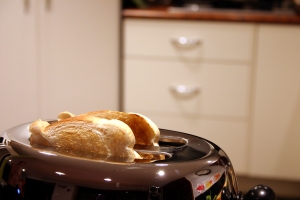 “You know the last time you had toast. 18 days ago, 11.36, Tuesday 3rd, two rounds. I mean, what’s the point in buying a toaster with artificial intelligence if you don’t like toast. I mean, this is my job. This is cruel, just cruel.”