EPO prosecution delays and the European Convention on Human Rights

A recent case decided by the EPO’s Board of Appeal has tackled the issue of delays in prosecution and noted that, for the application in issue, the duration of the first instance proceedings (12 years) amounted to an excessive delay. Reference was made in the reasons of the decision to other cases in which the Applicant’s rights under Article 6(1) of the European Convention on Human Rights have been infringed.

The decision in case T 0823/11 appeared shortly before Christmas last year and relates to European patent application number 96915827.8 which was filed as a PCT application way back in May 1995. The application entered the regional phase in December 1997 and the supplementary European search report issued in February 1999. A delay of nearly 5 and a half years then occurred before the first examination report issued (following a chaser letter from the Applicant).

The EPO and the Applicant exchanged chaser letters, exam reports and replies over the next 3 years but a summons to oral proceedings was not issued until March 2010.

The patent application was refused by the Examining division and the Applicant duly appealed. The Appeal Board decision is dated 21 December 2015.

Given the length of the proceedings in question, IPcopy thought it would be useful to generate a timeline showing the major case events. For reference the passage of time is also highlighted with reference to the UK Singles Chart Number ones*, the UK Prime Minister who was in office and the average UK house price… 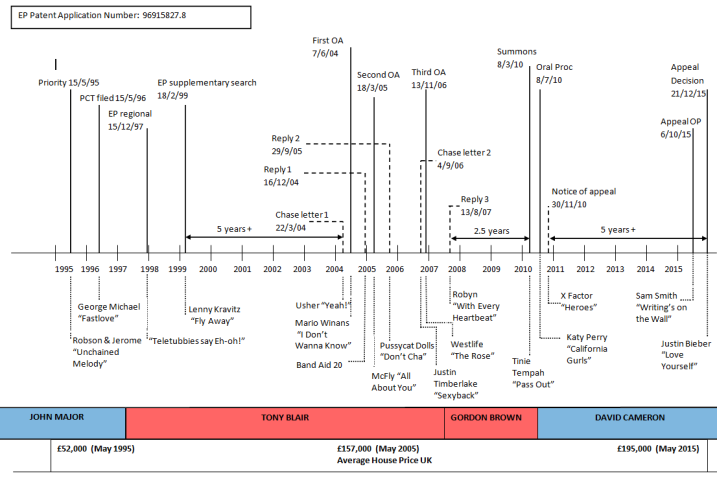 Case timeline – some of the song titles are actually quite appropriate**

In its decision dated 21 December 2015 the Appeal Board noted that a number of procedural violations had occurred:

i) the first instance proceedings following regional phase entry had taken over 12 years and this was regarded as excessive by the Appeal Board. Reference was made to two other cases (T315/03 and Kristiansen and Tyvik AS v. Norway before the European Court of Human Rights) in which delays were regarded as an infringement of Article 6(1) of the European Convention on Human Rights. The conclusions of these cases were regarded as relevant to the present case, in particular because the delays were not affected by any unusual behaviour of the Applicant;

ii) the reasoning given during examination proceedings was regarded as being inadequate. In the Board’s view the communications did not identify the closest prior art and the invention’s distinguishing features. None of the communications analysed the claim features or addressed the arguments presented by the applicant.

iii) the decision at the first instance oral proceedings was regarded as insufficiently reasoned under rule 112(2)EPC.

Each of the above were regarded as substantial proceedural violations and the Board subsequently reviewed the case and, rather than remit the case for formal reasons, remitted the case to the Examining Division on the basis of the auxiliary request. The Appeal Board also suggested the Examining Division should expedite its final examination given the long duration of the proceedings.

Some observations by IPcopy on this case:

*The chart singles chosen for the above timeline relate to the song at Number 1 at the end of the week incorporating the case event in question.

**The song associated with the Summons event seems particularly apt and may have described the Applicant’s reaction to actually receiving a communication….