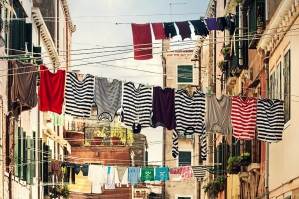 The Applicant in this case (Case No: O/550/171), ABC DETERJAN SANAYI VE TICARET ANONIM SIRKETI, filed an application for its ABC device in Classes 03 & 05. The Application claimed the colours red, blue, yellow and white.  The Opponent, The Procter & Gamble Company, filed a notice of opposition under Sections 5(2)(b) and 5(3) and relied on its EUTM Registrations for its monochrome Atomium mark in Class 03 and its coloured ARIEL ACTILIFT mark in Class 03 (subject to proof of use).

The test set out in The London Taxi Corporation Limited v Frazer- Nash Research Limited & Ecotive Limited, [2016] EWHC 52 and, following established case law, the test to establish use in a substantial part of the EU was also applied to find that the Opponent had made genuine use of the ARIEL ACTILIFT mark in the EU during the relevant period in relation to laundry related products.

The marks as wholes were compared. Whilst the Opponent’s Atomium mark was registered in monochrome such that normal and fair use could be in any colour, the UKIPO questioned how far one can go in attributing a distinctive colour scheme of the Application to the earlier mark. The UKIPO found that the Application involved a complex contrasting colour scheme and with considering the decision of Specsavers International Healthcare Ltd & Others v Asda Stores Ltd [2012] EWCA Civ 24 the UKIPO did not consider that the Atomium mark should be compared as though it was in the same colours as the Application. As such, the UKIPO considered the Atomium mark was capable of being used in any single colour but not in colour combinations.

Whilst the Application may call to mind the Opponent’s marks, it is unlikely that the public will believe that the Application is a brand extension of the earlier marks such that it was held that there is no likelihood of direct or indirect confusion between the marks and the opposition failed against all goods under Section 5(2)(b)

The UKIPO found that both of the earlier marks have a reputation for laundry products and that a link will be made between the Application and the earlier marks in relation to laundry products but not for the remaining products. Section 5(3) therefore succeeded in part. It is worth noting that ‘soaps’ covered by the Application was not found similar to the laundry and cleaning products covered by the ARIEL ACTILIFT mark.

It is important to remember that monochrome marks will not necessarily afford rights to colour combinations.

1Case No: O/550/17, UKIPO Decision- In the matter of the request for protection in the UK of IR No. 1291862 designating protection in the UK for the ABC device in Classes 03 & 05 in the name of ABC DETERJAN SANAYI VE TICARET ANONIM SIRKETI and Opposition thereto under No. 407649 by The Procter & Gamble Company, 31 October 2017

By ipcopyeleni in Trade Marks on March 23, 2018.
← Brexit and IP: EUIPO Q&A document Australia and New Zealand in a bit of a sticky situation over Manuka honey trade mark →