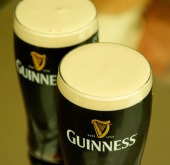 As we approach our national holiday we can’t help but feel patriotic. Here we take a look at what the good people from the Emerald Isle have contributed to the world over the years and more importantly how intellectual property has played its part. There are plenty of impressive technical advancements that originated in Ireland including the induction coil, the submarine, the hypodermic syringe, the binaural stethoscope…We could go on and on, but we understand you have plenty of other priorities for the weekend so we’ll keep it snappy with our top 5 intellectual property related contributions that play a pivotal role in the everyday life of the Irish individual.

1) Starting with the most recognisable – Guinness! In 1876, Guinness trade marked the famous harp symbol which itself stems way back to the times of Brian Boru. When the Irish Free State Government finally formed in 1922, they were forced to turn the national emblem – the harp the other way around. This really shows the power of trade marks, bear in mind that this “reversed” harp appears on all Irish coinage and the presidential flag. Guinness also trade marked the text and Arthur Guinness’s signature both of which are now synonymous with the brand.

Not to mention the wonderful widget – this lovely patented invention came to be in 1969 for all the heathens who drink Guinness from a can. The Guinness website explains that “when the can is opened, a small amount of beer and nitrogen, trapped in the widget is released”, this provides the lovely creamy head that we all love so well. The thing is, we all know it’s nicer from the tap but sure isn’t it the thought that counts! 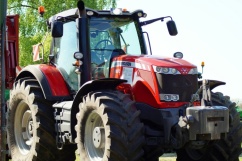 2) The mighty tractor – it’s not a bit of wonder that this invention hails from Ireland with our love for all things farming. The County Down man Harry Ferguson is responsible for creating the modern tractor. In the 1920s he began to file patents for his innovations including one for a three-point linkage system in 1928. Subsequently Massey Ferguson was established. He consequently shaped the world of farming to this very day. These tractors are still instantly recognisable by their strong design features and most commonly their striking red colour. You know what they say about other tractors “If she’s not red, keep her in the shed”.

3) Whiskey – Now I know what you are thinking and yes, Aneas Coffey didn’t invent whiskey – he didn’t even invent the first column still. What he did like any good inventor was to look at what had already been invented and then address its shortcomings, the resulting invention has been the basis for almost every column still used every since. This very efficient piece of equipment led to huge advances in distilling in other spirits such as gin too. He patented his invention in 1830. Interestingly the pot still prevailed as the distilling method of choice in Ireland but Scotland took to the column still like a duck to water.  So as is the norm, we can all sit and ponder (argue) about what whiskey is better but at the end of the day, all roads lead back to Ireland.

4) The bacon rasher – Something we all take for granted these days when we sit down to our ‘full Irish’. The Waterford man we have to thank for this is Henry Denny. He  had a number of bacon-curing related patents to his name. In 1820, he revolutionised the way in which bacon is cured. Instead of soaking large chunks of meat in brine, he used long flat pieces with dry salt. His innovation enjoyed success globally and helped to improve the overall quality and shelf-life of bacon. His name lives on in the Denny brand which we all know and love today. 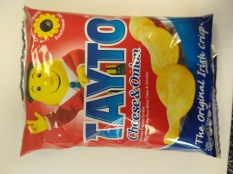 5) Last but not least we have something to be truly thankful for – flavoured crisps and not just any crisps – cheese and onion crisps. In 1954, good old Joe “Spud” Murphy set about inventing the production process to create the first ever flavoured crisp. Soon after, cheese and onion crisps were born and the Tayto empire was established. Joe successfully relied on trade secrets and a flair for marketing to keep his competitors at bay before selling his company. But sure we all know when it comes to crisps there is no competition – long live Tayto.

By ipcopy in General Interest, Patents, Trade Marks on March 15, 2019.
← Phenomenal Females – Inventors that the world should know about Brexit delayed: EU offer “If This Then That, Else” extension →