The theme of the 2-day conference was the protection of luxury brands in a fast moving world. The full program can be viewed here.

Presentations covered a range of topics relevant to luxury brands and included not only the legal aspects of their protection but also perspectives from a marketing expert, an academic and a financial analyst on the industry and its outlook.

Particularly interesting to the Keltie Design Team were the presentations reviewed below.

Clemens Pflanz, CEO of Meisterkreis, introduced the audience to his organisation, born from a German luxury brands’ initiative against public indifference to counterfeit goods. IPcopy will report in more detail on Meisterkreis and its activities in the coming weeks.

In the session dedicated to the Swiss watch industry, Paul Rust gave an overview of the inception of the IP Panel operating at the Baselworld jewellery fair, its development and statistics. The IP Panel, with which the Keltie Design Team is familiar, was created in 1985 after the Civil Courts of Basel were paralysed by 80+ design/trade mark infringement and unfair competition claims brought against exhibitors during the 8 days of the fair in 1984. The IP Panel had immediately a spike in activity, which continued steadily until the number of complaints lodged diminished in the last few years. Complaints are lodged with the panel by 4 pm on any given day of the fair, the defendant exhibitor is notified and has 2 hours to submit a defence and the Panel’s decision is communicated in writing to the parties by 12 noon of the following day. In case of a finding of infringement, the infringing exhibitor is also presented with undertakings to be signed on the spot and must withdraw the offending articles. The Panel’s decisions have a scope and effect limited to the fair and end with a finding of infringement or non-infringement and withdrawal of the offending goods (if appropriate) from the exhibition. Any claims for further remedies must be brought before the competent civil courts outside the fair.

Mr Rust gave some interesting figures: just over 70% of the complaints relate to watches and approx. 62% of the complaints are based on design rights. He then proceeded to illustrate some case studies from cases handled by the Panel at the 2015 fair.

The panel also featured a presentation by Yves Bugmann, in-house counsel for the Federation of the Swiss Watch Industry FH. The FH is a 500+ members strong association dedicated to the protection of the Swiss watch industry and its “swissness” (“swissness” being synonymous with quality as well as a form of certification of origin). Mr Bugmann told the audience that there are more fake than genuine Swiss watches in circulation in the world and proceeded to illustrate the strict criteria under which products in general can legitimately be called “Swiss Made” under Swiss Law. One criteria is that at least 50% of the value must be created in Switzerland. For industrial goods, including watches, the standards and requirements are higher. For example, 60% of the production costs must be incurred in Switzerland.

At various points during the conference, the question came up of whether the Apple Watch will have an impact on the Swiss watch industry. Swatch already has a smartphone watch lined up to answer the Apple challenge. However, the speakers who touched on the topic, seemed generally unconcerned by the Apple Watch, considering it ultimately a product fulfilling a different purpose.

The second day of the conference was dedicated to workshops and the Keltie Design Team attended the workshop focussing on the counterfeiting of luxury goods on the Internet. Richard Graham of Richemont International UK gave an overview of the problems faced by luxury brands in online enforcement as a starting point to a conversation in which the panel (including Nathalie Luis of L’Oreal UK) and the audience shared experiences and tried to come up with solutions. The main challenge, everyone agreed, is one of volume: online infringement and counterfeiting simply defeats the resources any brand may put into fighting it. That is why prioritisation becomes key to a successful online enforcement strategy.

The online world is also particularly challenging because of all the new forms of interaction with users that are constantly created: if take-downs on eBay have become routine and relatively easy to deal with, there are new social media platforms, like Instagram for example, which still remain fairly unchartered when it comes to IP enforcement.

Kering (owner of luxury brands such as Gucci and Bottega Veneta) was widely praised in the workshop for the brave move of suing Alibaba in the US.

The Keltie Design Team noted that the talks occasionally skewed to the introductory level and as experienced IP practitioners we would welcome MARQUES running more events of this nature in the future that examine this subject in greater depth. 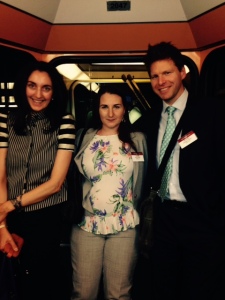