Home » Patents » The Patent Box Reloaded – Welcome to the Nexus

The Patent Box Reloaded – Welcome to the Nexus

HM Treasury and HM Revenue and Customs have jointly launched a consultation on proposed changes to the UK Patent Box scheme. The changes are being proposed in order to meet proposals developed by the Organisation for Economic Co-operation and Development (OECD) to harmonise preferential tax regimes that operate in G20 states.

The consultation runs until 4 December 2015 and sets out the Government’s preferred approach to the new international framework set out by the OECD. The consultation will affect UK business that hold/exploit patents.

Due to some slightly compressed deadlines arising from the OECD, the Government’s plan is to publish proposed legislation in December 2015 and then a response to the consultation in spring next year. The current patent box rules will apparently be modified by legislation in the 2016 Finance Bill.

The consultation document includes some background on the existing Patent Box scheme. The Patent Box, which of course is a tax initiative that seeks to make the UK competitive for high-tech companies, has apparently seen 639 companies taking part so far and receiving benefits that total £335 million.

The main proposed aim is that for a business to gain the benefit of a preferential regime such as the Patent Box, it should have undertaken the substantial activities that generated the income which is to benefit from the regime.

As far as the Patent Box is concerned the proposal is that R&D expenditure is to be used as a proxy for “substantial activities” via the so-called “nexus approach”.

Under the nexus approach a “nexus fraction” will be calculated. The calculated fraction will be the proportion of the IP profit which may be included in the Patent Box scheme.

Under the proposed revised regime a company will  need to track IP expenditure to the patent level or the product level. This is likely to increase the record keeping burden of participating in the revised scheme.

Companies who have developed their own IP are likely to have a nexus fraction of close to “1” and so will essentially be unaffected by the revised rules. However, company’s which have acquired IP will see nexus fractions of <1 which will therefore reduce the income which qualifies for the new Patent Box. 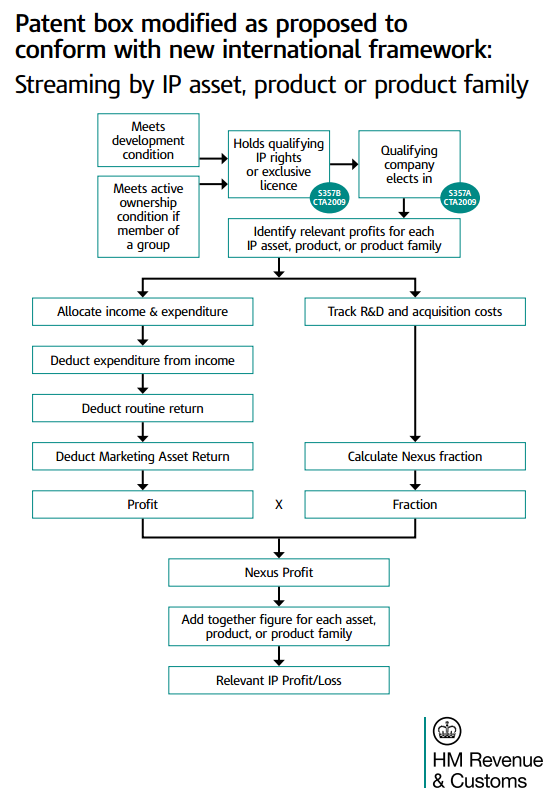