Unitary patent renewals: A closer look at the proposals

This infographic is still basically correct…..

A week ago we noted that IPKat had received details of two proposals (2.5 proposals if you count the SME variant) that the EPO is seriously considering with respect to the renewal fees for the unitary patent.

After we got over the initial shock that some actual figures had been revealed (leaked?) we took a closer look and realised that what most of the commentary was missing on this news was some fancy-ass graphs. So here, for your viewing pleasure, are some fancy graphs*, some comments and an observation or two.

Then last month, Margot Fröhlinger apparently suggested that a renewal fee for the UP equivalent to the top four validation countries in Europe might be possible for the EPO to accept but a top five level was more likely as it would be budget neutral for the EPO.

The information received by IPKat seems to confirm the Top 4 or Top 5 levels are the two main scenarios being considered. The year-on-year renewal fees, for both proposals, are arranged into three different regions.

As a slight concession to the idea that the unitary patent should also be of benefit to SMEs, the Top 5 proposal comes in two flavours, “full-fat” where you pay the headline rate and “SME-light” where a 25% reduction for Years 2 to 10 is available for SMEs, natural persons, non-profit organisations, universities and public research organisations.

Of course, the yearly figures are perhaps a little misleading when you consider that the application process at the EPO is slooooowwww.

If, instead of yearly figures we look at cumulative amounts and furthermore we assume that the patent doesn’t grant until some point in its fifth year so that the first post grant fees are paid in year 6, then the graph changes again to look like this: 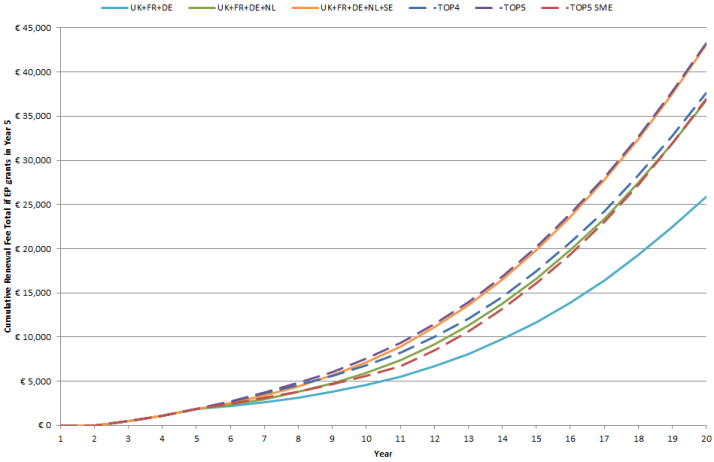 The cumulative graph shows us a few things. Firstly, once the pending application period is factored in the slightly choppy nature of the yearly unitary patent renewal fees in the early years gets smoothed out. Secondly, there’s not going to be a huge amount between the Top 4 and Top 5 proposals and the corresponding 4 or 5 most popular member state renewal amounts. Thirdly, there’s a fairly significant 18,000 Euro (approx.) difference between the cumulative amounts for the Top 5 proposal and the three most popular member states.

What we suspect this will all boil down to is;

(i) how important portfolio pruning is to a particular patent owner. If you are rigorous in paring down your portfolio in Europe in the later years of a patent’s life then the unitary patent is probably far enough removed from the average user (around 3 validations on average) to make it seem like a fairly poor deal financially even once the geographic increase in protection is taken into account, and

So, China and the US still look pretty attractive options compared to the unitary patent, especially in later years…..

* A quick note on the graphs from ipcopylaurence:

“Regarding the British pound and Swedish krona conversion to Euros, the rates used were 0.8 GBP and 9.1 SKR to 1 EUR respectively and rounded to the nearest 5 EUR (in order to get the 10 to 20 year renewal fees to match the TOP4 and TOP5 fees from the EPO). These rates appear to be more favourable to applicants, in particular for GBP which at time of writing stands at 0.71 GBP to 1 EUR.

We also understand that presenting the fees as continuously increasing over the 20 year period is incorrect, and that strictly speaking, they step change every year. However, ipcopymark, despite my protestations, felt that the step change wasn’t as aesthetically pleasing as the factually incorrect continuous versions used in this article.”