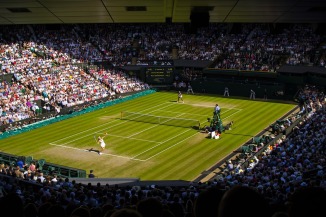 While the sporting focus at the moment is in Russia, where England will be attempting on Wednesday to make a World Cup Final for only the second time in history, there is of course another major sporting event running at SW19, the Wimbledon Tennis Championship.

Although the game of tennis is fairly simple, requiring just a court, some racquets and tennis balls, it is, like every other sport, subject to huge amounts of innovation which can be seen in the patent record that stretches back well over a hundred years.

Racquet technology in particular has moved on leaps and bounds since US4196901 was granted back in  July 1891. This patent, which is so old it doesn’t have a full entry on Espacenet, apparently related to the manner in which the racquet strings were wound around the frame of the racquet.

Jumping forward to the 1970s brings us to the Prince tennis racquet that introduced us to the oversized racquet head. US3999756 from December 1976 was granted around the time that aluminium was replacing steel as the material of choice for tennis racquets. This allowed manufacturers to explore oversize racquet heads of which this Prince patent is a prime example as it offered more than 50% string area than wooden framed racquets and a larger sweet spot. A version of this racquet was wielded by Pam Shriver on her way to the Final of the US Open in 1978.

Like all sports tennis requires hours and hours of practice but what to do if  your practice partner or coach decides they’ve had enough for the day? Enter of course the ball machine. This is yet another Prince innovation!

Having spent all days smacking tennis balls to all corners you’d probably be forgiven for feeling a little tired and sore and looking for some help retrieving them. This handy ball retrieval device (US9878215) clips to the top of your tennis racquet and allows you to pick up your tennis balls with a gentle sweeping motion…

For the pro players out there practice is just part of the game and US2015141175 provides a sensor device (101 in the image below) that is placed within the string area of the racquet to collect data from a game which can subsequently be analysed.

And no run through, however quick, of the world of tennis would be complete without stopping off for a look at the Hawk-eye system, a computer system that is now used in a range of sports from tennis to volleyball and which used was originally developed in the UK in 2001 for cricket. In the Hawk-eye system a number of high definition cameras are placed around the playing area and are used to track the ball from a number of different angles. The data from the various cameras is then integrated together to create a 3D track of the ball’s trajectory to within less than 4mm. The patent can be seen here. It is noted however that Hawk-eye isn’t always right….

Those of you wondering how I managed to identify  US4196901 from 1891 as being a tennis related patent when the Espacenet database doesn’t contain its details are invited to check out this page on the Etsy website, an interesting coming together of fashion with the world of patents! If you want a T shirt with a picture from US 455632 then Etsy has you covered.